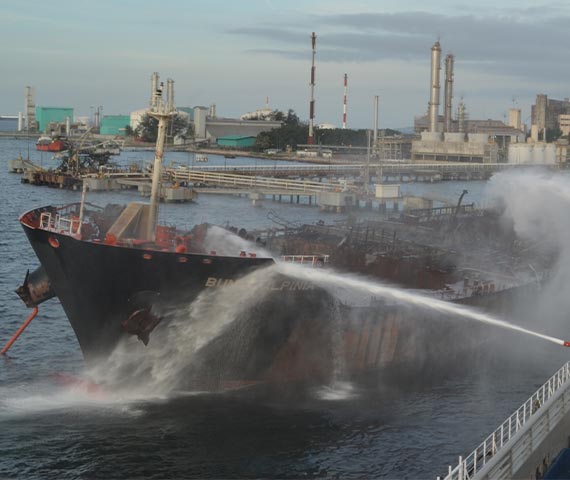 We possess the salvage skills, equipment and solutions for the transfer and recovery of all types of liquid cargo.

Inaccessible locations. Extreme climates. Heavy oils with ultra-high viscosities. These are the challenges faced during salvage operations on land or at sea. On top of that, there is the potential problem of spills, which not only cause serious environmental damage but are also expensive to clean up. This is where Pro Liquid comes in.

Whether at shore installations or offshore, we provide salvage support services to handle and recover any liquid cargo, even in the harshest conditions. Using proven Pro Liquid pumping equipment and our proprietary Pro Liquid P.U.M.P.S® (Portable Ultra-viscous Marine-fuel Pumping System), we safely, effectively and efficiently remove oil or any other pollutants to protect you from potential financial, economic and environmental liabilities. 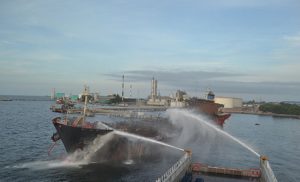 A 38,000 DWT IMO II chemical tanker carrying methanol was struck by lightning and engulfed by fire. The raging blaze and the vessel’s volatile cargo formed a deadly combination that could cause an explosion. To make matters worse, the tanker was a mere 150 metres away from a nearby methanol storage tanks and was drifting towards it. If the flames from the tanker ignited the storage tanks, it would result in massive destruction of the surrounding area. Throughout the night, offshore supply vessels tried dousing the fires with their water cannons to little effect. To prevent another catastrophe from happening after the fire was subdued, the cargo had to be quickly and safely offloaded.

With the understanding that this was an emergency where time was of the essence, Pro Liquid rapidly deployed a team of trained personnel and supervisors to the distressed vessel. Armed with emergency offloading equipment, such as nitrogen generators, explosion-proof power packs, chemical pumps, hoses and fenders, our team joined the crew in battling the incident. With the fire subdued, we were able to safely offload the tanker’s remaining cargo of methanol and decontaminate the vessel.

Thanks to the quick action of our team, we were able to safely and efficiently prevent further spillage of chemicals by offloading the remaining methanol from the tanker. As a result, we reduced the losses sustained from the accident and limited the severity of damage to the environment.

We’ve got you covered

ANYWHERE IN THE WORLD

Pro Liquid is a one-stop liquid cargo handling service provider specialising in the maritime and petrochemical industry. We offer 24/7 worldwide solutions such as liquid transfer services, salvage support, ship-to-ship transfer services and expediting & loss control, as well as rental and sale of equipment.

We use cookies on our website to give you the most relevant experience, to improve performance and for marketing purposes. By clicking “accept all”, you consent to the use of all the cookies. However, you may visit "cookie settings" to set your preferences.
Cookie SettingsAccept All
Manage consent

This website uses cookies to improve your experience while you navigate through the website. Out of these, the cookies that are categorized as necessary are stored on your browser as they are essential for the working of basic functionalities of the website. We also use third-party cookies that help us analyze and understand how you use this website. These cookies will be stored in your browser only with your consent. You also have the option to opt-out of these cookies. But opting out of some of these cookies may affect your browsing experience.
Necessary Always Enabled
Necessary cookies are absolutely essential for the website to function properly. These cookies ensure basic functionalities and security features of the website, anonymously.
Functional
Functional cookies help to perform certain functionalities like sharing the content of the website on social media platforms, collect feedbacks, and other third-party features.
Performance
Performance cookies are used to understand and analyze the key performance indexes of the website which helps in delivering a better user experience for the visitors.
Analytics
Analytical cookies are used to understand how visitors interact with the website. These cookies help provide information on metrics the number of visitors, bounce rate, traffic source, etc.
Advertisement
Advertisement cookies are used to provide visitors with relevant ads and marketing campaigns. These cookies track visitors across websites and collect information to provide customized ads.
SAVE & ACCEPT